We finally made it back to Idaho to visit as a family!  Yes!  Even Hoss got to come!

We started out on a Friday evening.  We left Hobbs kind of late, around 9:30 pm, and arrived in Albuquerque, NM around 3:30am.  We are very blessed to have a wonderful friend, who has wonderful connections, who was able to get us a hotel.  We slept as long as we could, and Hoss took the kids swimming before we headed north.  A big thank you Danny!

If anyone has made a 1,200 mile trip anywhere really knows what it is like driving all day long.  We saw some beautiful scenery and really enjoyed seeing the mountains get bigger and bigger as we continued north.  If there is one geographical thing we really miss, it is mountains!  The trip was uneventful, which is a good thing.  No issues whatsoever.  I did the majority of the day and evening driving, leaving Hoss to take over at Lehi, UT, where we met up with his brother Andy, in order for us to take his daughter with us to have an extended sleep over with Bunny and Bug!  Yea!  There was so much giggling in the van that night! 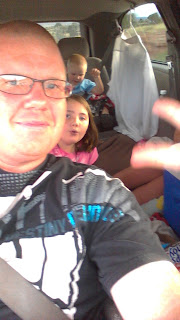 Some of the highlights were the following:

We went to Lagoon, which is a smaller amusement park.  Hoss and I very effectively got sick.  It was a hard drive back to "Papa" and "Gamma" Curtis's house!  Boy did I feel my age that day! But the blessing was getting to spend time with Jason's brother Andy, his family, and an extra niece!  It was a fun-packed day!

Little cowboy hated every single ride he went on!  Maybe I shouldn't have put him on a fast ride to start. :)  I put him on one that goes in circles pretty fast (not pictured).  While we waited for it to start, he cried and cried.  I'm sure people were giving me looks.  But once it started, he stopped crying, but started saying, "Oh no!  Oh no!"  But that "oh no" eventually morphed into an outright hollering, "aaaaaaaaaaaaaaaaaaaaaaaaaaah!"  To complete silence as the ride sped up to a speed where he couldn't hold himself up.  He was leaning on me quietly.  Then when the ride switched and started going backwards, he started yelling, "Oh no!  Oh no!" again.  So, I don't think he hated it, but he sure didn't love it!  I really wish we would have had a video of that.  It was pretty entertaining.  His facial expression in the picture below was pretty much his expression for every other ride, including the carousel.

Another story:  Bug got into one of the tea cups with Uncle Andy, Kim, and Ansley.  There were honey bees all over the park, and one just happened to fly up the hem of Bug's shirt.  Andy, in an attempt to prevent her getting stung, spanked her on the rear end, making the bee drop out in a daze.  Unfortunately, it landed on Bug's hand, and when it came to, decided it was angry and stung her on the hand.  I always told her that it doesn't hurt that bad.  It just stings for a minute.  Later on, she told me that "I was wrong.  It hurt really bad!"  Pour thing!

The next day, rightfully so, we relaxed a little bit more.  Ha!  We needed to recover from the strenuous day!

The next day, I was able to play volleyball with some of the v-ball gals back in Pocatello!  It was a great time!  Then later in the day, we made it to Idaho Falls, Idaho, where my brother Grant and his family live.  We were met by my other brother Paul and his family!  I hadn't seen Paul for 3 years, and Hoss hadn't seen him for 4!  So it was a fun visit!  We had a delicious dinner, had some good conversation, and roasted marshmallows for s'mores later on!  Jylisha can paint a better picture, as she is much better at going into detail!  You can see pictures of our time at there house here.  Paul had to leave, but we spent the night, then Hoss and I were able to go to the temple in the morning, together!  That is a rare occurrence!  We usually have to take turns going in and make it a full day.  So thank you Grant and Jylisha!  That was a blessing!  We then parted ways and headed back to Pocatello. 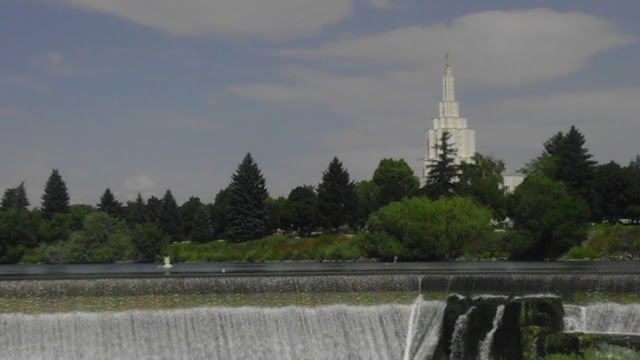 The crowning event of our trip was baptizing Bug at her grandparent's ward building!  It was an amazing event, filled with some of our favorite people!  I only wish I had gotten a picture of all those who were there!  Thank you so much for coming and blessing us with your presence!  The baptism was on August 23rd at 6pm ish.  It rained so hard that day!  We had to actually stall for about 45 minutes in order to get everyone there that was a part of the program!  There were streets completely flooded and closed off.  Even the Center St under pass was flooded nearly to the top!  Even with all of the setbacks, Bug got dunked in the font!  It was an amazing experience!  The spirit was so strong!  Afterward, we had a huge potluck for all of our friends and family who were able to come!

Saturday was filled with having some family pictures taken by Uncle Alan.  We got some pretty sweet ones!


Then we took a short trip to Soda Springs to check on my parent's house (who are on a mission in Nauvoo-their mission blog is here) and pick huckleberries with Uncle TR and Aunt Amber!  It was so much fun!  I wish we had mountains close by so we could do that more often.  But we'll just have to settle for amazing sunsets and longer summers.

Sunday we were able to meet with all of Hoss's family for dinner after church.  We had some good laughs, and gave hugs and returned back to Papa's house for one last game of Catan before we had to go to bed to prepare for our trip in the morning.

We wound up leaving Pocatello shortly after lunch time.  We stopped at Temple Square in Salt Lake City, UT to view the visitor's center.  It had been quite a long time.  After that, it was one short stop to have a late lunch with Uncle Andy and his daughter before continuing south. 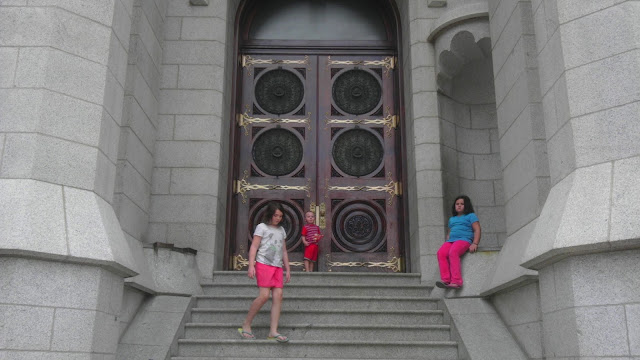 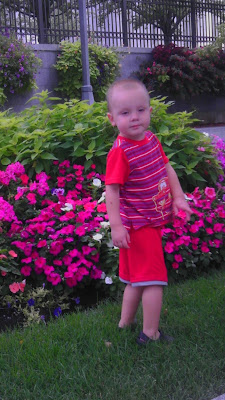 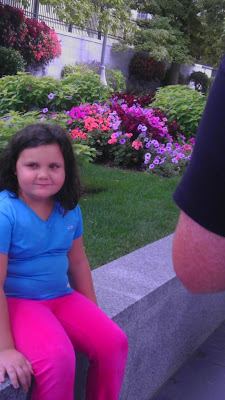 The trip home was very long, but we spent the time reading a fabulous book entitled "Visions of Glory" by John Pontius.  I can't endorse it more than I have.  It is amazing, and if you haven't heard of it, now you have, and if you haven't read it, you should!  It is life changing!  Some of you have already heard me talk about it.  So forgive me for mentioning it again. ;)

We made it home at about 4 am Wednesday morning.  We spent the day sleeping mostly.  It felt surreal, but good to be home.  The trip definitely did us so much good.  Hoss then had to go back to work the next day.  Back to the daily grind!

This was a perfect vacation to end our summer!

Here are a few extra photos 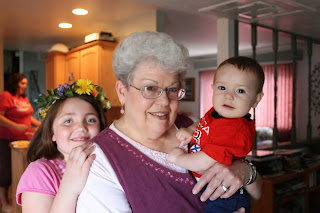 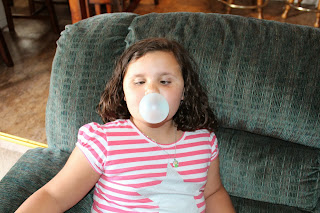 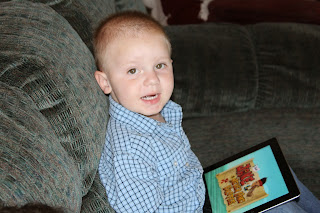 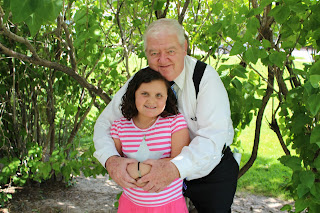 Posted by Unknown at 10:06 AM 5 comments: Links to this post

I thought I would share the last little project that I made.  It is a Travel Lap Tray.  I wanted Little Cowboy to have someway of having extra fun distractions without dropping stuff and losing stuff constantly in the car.

It was pretty simple and easy.  The only reason it took most of the day was because of all the breaks that I had to take in order to feed the kids, get them ready for naps, and go to the grocery store.  You know, the important things in life!

Here is the finished product.  I think all three kids will really enjoy it...even though it is made for LC.

The birthday girl is my model (That will be another post),
since Little Cowboy didn't want anything
to do with the picture taking. 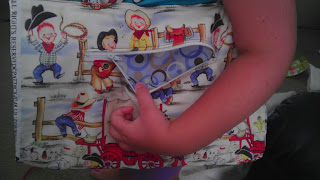 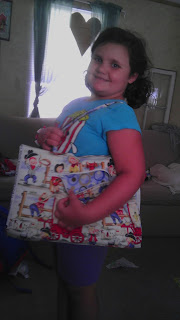 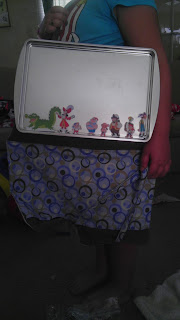 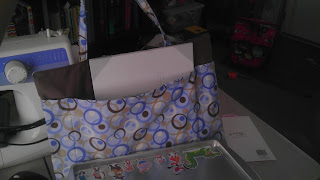 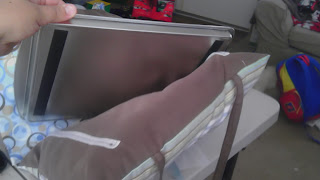 The tutorial to make this is located here.  It was a lot of fun to make, and I love how it turned out.  The little cookie sheet is for magnets and helping to keep little toys, food and odds and ends from falling off of Little Cowboy's lap and such.  It is velcroed to the little pillow.  So, it is not only a lap table, but it is a pillow too! Ha!  We'll see if it gets used as a pillow!  I would make this again.  It was that easy.  The fabric I used were old baby sheets (circle pattern)/king sheets (brown fabric), baby blankets (striped flannel), and some extra fabric from another project (little boy cowboys).
Posted by Unknown at 5:30 PM 4 comments: Links to this post

I am pretty good at filtering through fun crafts, art techniques, and sewing crafts.  It is kind of hard when you have a wide range of interests.  There is definitely not enough time to do them all regularly.

My latest interest is in creating a visual or art journal.  I have watched a lot of videos on the subject, looked at a lot of pictures of journal pages, and I have finally prepped my own visual art journal!

Many people will take an old hard back book and use that.  I had a book that I was getting rid of, so instead I held onto it until I was ready to start my journal.  I began by tearing out 40% of the pages.  This is necessary, because as you journal, you will most likely add things into it, adding thickness.  Not to mention that would just be way too many pages to have to journal.  I counted 10 pages folding them over, then tore out the next 10... and so on throughout the whole book.  Then I tore off the cover liner.  It was a plastic type of material making up its cover art, so once I cut into the edge of the hard cover, it peeled off quite easily.

This is what it looks like after that step. 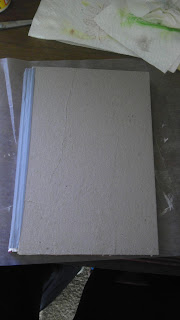 Then I glued every two pages together in order to create a thicker sturdier page to paint and craft on.

The theme that I chose for my visual journal is along the lines of tender mercies of being a mother.
I have a lot of material to go with this theme, so it seemed like a given!

I finally got my first page spread done!  I'm excited!  Have a looksie! 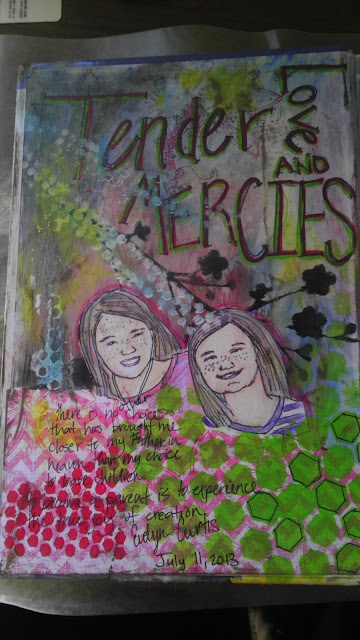 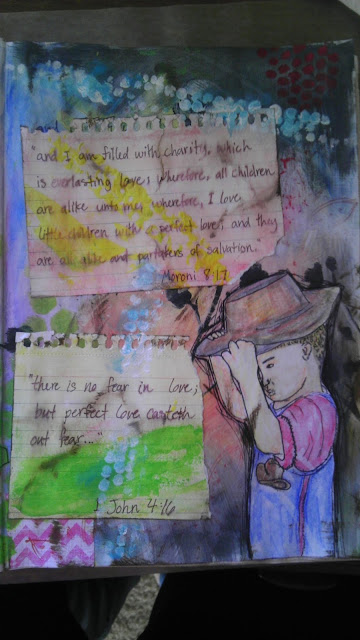 Here is the full spread together. 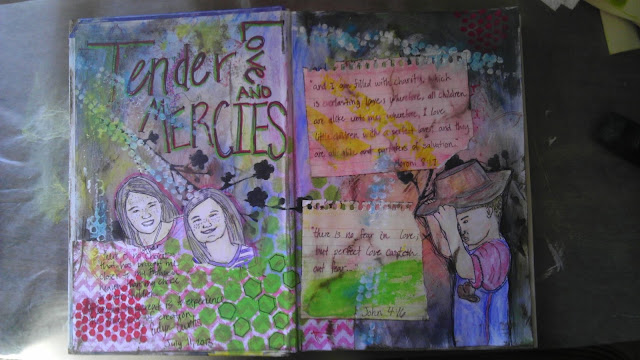 This whole process was a lot of fun, and I'm looking forward to more creations!

This post was for Kendra, my sister, so she could see my progress.
Posted by Unknown at 5:40 PM 3 comments: Links to this post